Even when I’m teaching science or math, my English degree means that I love using poetry and literature to teach every content area. Cinquain poems are one of my favorite things to use to get students connected deeply to the concept we’re studying.

Cinquain poems are perfect for teaching vocabulary because they’re short, student-friendly, and focused.

What are cinquain poems?

Cinquain is one term for a five-line poem, usually a specific structure of five-line poem created by American poet Adelaide Crapsey. She was influenced by Japanese poetic forms like haiku and tanka.

At first, the version Crapsey developed required the syllables to be stressed a certain way. If you’re not familiar with it, stress means the emphasis we put on words or syllables.

Cinquains have changed a little bit, and now they usually have a set number of syllables.

Cinquain Poems in the Classroom

In school, we most often use a form of cinquain poems called didactic, meaning “learning.”

The predictive, sing-songy nature of a cinquain is perfect for students, and works wonderfully with vocabulary.

How to teach vocabulary with cinquain poems

Cinquain poems are a great exercise by themselves in a Language Arts class. In other content areas, they are perfect for teaching vocabulary. (Of course, ELA teachers can use cinquains to teach vocabulary, too!)

Here are some ideas for using this simple poetic style to teach vocabulary.

Here’s a social studies example of what I mean.

You can choose if you want to capitalize the words or not. That’s a writer’s style choice (unless a word is a proper noun that should be capitalized).

You can also choose how to punctuate them as well. There are no hard-and-fast rules.

Once you’ve shared the example, work together as a class to create an example together. Then, have students work independently or in pairs to create one.

Optionally, you can then compile all of the created poems to share with all students. If you have students create the cinquains in a shared document, you can easily have them see each other’s poems.

Note: The subject of a cinquain is typically a noun. It’s difficult to write a cinquain about an adjective or adverb, especially, so it works best for vocabulary words that are nouns.

If you would like to have me teach it, I have a student-facing video

you can play in class (or link to) that will explain cinquains to your students. There’s also a slidedeck in case you would like to do the instruction yourself and would like a (gorgeous) slidedeck to use.

Another option to use cinquain poems to teach vocabulary is to have students create a dictionary of vocabulary words where each entry is a cinquain poem. When this is done, students should be sure to add an image that they create or find.

This can be done in a few ways.

Have Students Guess the Vocabulary Word from the Cinquain Poem

Another option is to have the students create cinquain poems, leaving the first line blank. Other students then guess what word goes in the first line.

There are a few variations on this:

Get Your Cinquain Poem Kit

I’ve mentioned the dictionary and instructional video already. They are part of a Cinquain Poem Kit I created that has everything you need to use cinquain poems to teach vocabulary. You can use the entire kit, or any one of the individual components.

I spent a long time making sure it’s the best thing on the internet about cinquains, and I hope you love it!

Up until this point, we’ve been looking at standard cinquain poems, but there are other variations you may like to explore. This is a great way to differentiate for your high-ability learners. All of the activities described above will work with these cinquain forms, too. Let’s look at some of the possibilities!

The two are very similar. The only difference is that the fourth line doesn’t have to have four words. Instead, it forms a complete sentence that can have more than four words.

This can be a very good choice when you want to focus on a key vocabulary word.

As its name suggests, a Reverse Cinquain is a traditional Cinquain with the internal structure reversed.

Instead of the syllable structure being:

A Reverse Cinquain has

Because in school we typically use a word-count-based Didactic Cinquain, reversing those looks just a little bit different. We don’t worry about syllables. Instead, we focus on words.

These work very well for things that move in reverse, counterclockwise, or backwards. For example, there are processes in the water cycle that move both ways. In social studies, civilizations rise and fall. Use a Reverse Cinquain to have students explore the words related to those types of happenings.

Here’s an example of a Reverse Didactic Cinquain:

Reverse Cinquains are great for words that are atypical or somehow unusual. Think Alice in Wonderland.

They’re also just fun because they create a kind of mini-mystery.

A Mirror Cinquain is actually two Cinquains – a regular Cinquain followed by a Reverse Cinquain.

To make these even more fun, you can have the last line of the first Cinquain be the same word as the first word of the Reverse Cinquain.

Here’s an example using vocabulary words from the novel Island of the Blue Dolphins:

Mirror Cinquains are particularly fun to do, and they work very well when there are two related vocabulary words in a text.

A couple of options for using a Mirror Cinquain in vocabulary instruction include:

There are other types of Cinquains as well that are much longer (five or six Cinquains together). The ones I’ve described and shown examples of are the ones that are the best fit for vocabulary words.

Have students reflect on their cinquain poems

Reflection is an important part of the writing process, and this is true of cinquain poems. Have students reflect things like:

After the students have written their poems, compile them in a way that they can be read and appreciated.

A great way to make small poetry books is to have students make simple stapleless books. These require nothing more than four pieces of paper, a pencil, a pair of scissors and a ruler.

They’re easy to make, but hard to describe, so you may wish to watch this video

that shows the process.

All of the Google products work well for sharing cinquain poems, especially Google Slides and Jamboard. Because they work more easily with images and textboxes, I recommend them over Docs.

To use Google Slides, you can create a class slidedeck with a slide for each student. Put their name in the “Speaker Notes” section below the slide so they know which slide to use. Optionally, you can have them insert an image to reflect the poem’s subject.

For Jamboard, the maximum number of frames is 20, so you can either:

Cinquain poems are a wonderful vocabulary exercise because they invite creativity, broader thinking, enrich language experience, and help students develop a deeper attachment to the word.

Because they can take time to create, they keep students focused on the target word longer. With vocabulary, longer is better.

We know that best practices in vocabulary instruction include multiple, varied experiences with the word, and Cinquains are a perfect option for helping this happen.

So many of the articles on the site have free downloads! Poke around and grab all the goodies to make teaching vocabulary fun and effective!

If you would like the Cinquain Poem Kit, you can find that here

link to Where to Find Great Vocabulary Activities

Continue Reading
link to How to Teach Denotation and Connotation

Usually when we use the term "vocabulary," we mean understanding a word's definition so that you can use it and bring it into your own personal lexicon. You can’t study vocabulary without... 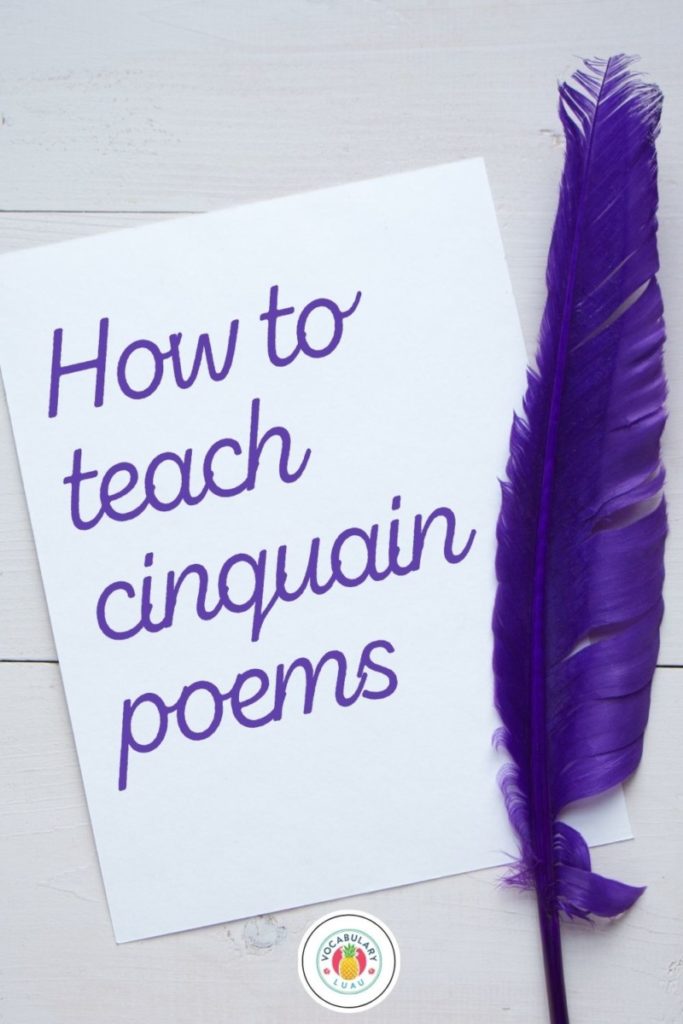