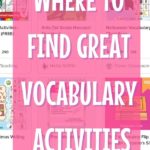 When I’m looking for vocabulary activities, one of my favorite strategies is what I call phone-a-friend. What I mean by that is that I see what other teachers have already thought of and are sharing.

Just like I’m sharing every idea I have here at Vocabulary Luau, other teachers share ideas, too.

Here are some of my favorite places to find vocabulary activities:

There is so much great stuff there! (I’m not just saying that because some of my stuff is there, promise.) I go to TpT and do this search. It pulls up all of the free vocabulary resources.

I can sort further by checking a specific grade or content area. I’ve found loads of great stuff that way, and it’s the first place I check.

I often joke that I became a teacher because I like office supplies (and that’s true), but it’s also true that I fell in love with The Mailbox magazine when I was a kid and saw it on my own teacher’s desk. I thought it must be the best job in the world to get a magazine like that and be able to call it work.

Now, lots of it is available online, but my library subscribes to it (yea for libraries!), so I grab issues there. I also find old copies sometimes at used book stores.

In addition to old copies of Teacher’s Friend Monthly Idea Book that I find at used book stores, I also poke around the Scholastic site in their vocabulary activities section. Even though the magazine is for younger students than I currently teach, I find that my older students love the activities.

Baby and bridal shower games are perfect for adapting for vocabulary. They’re usually quick and designed to be amusing. Not all of them work (no measuring a belly with toilet paper or tasting baby food), but many of them do. Here’s an example of one I found that I adapted:

In this bridal shower game, the host asks the bride and groom a series of questions. The guests then guess which one of them said it. For example, who initiated the first kiss? Who is more likely to get up early? Who will die without coffee? Who takes longer showers? Who cooks dinner?

I thought, “What if I had two words and ‘asked’ them questions?”

From a somewhat silly game at a shower arose a powerful critical thinking game.

A variation on this game is to make the decisions yourself ahead of time and see how well you and the class match.

Here are some actual examples of what I mean.

I was in a professional development session where we played a game (don’t you love that?) that was a getting-to-know-you game. I didn’t enjoy it at the time, but later, I thought, “Hm, I think we could do that with words – the kids could have the words get to know each other.”

This had the added benefit of redeeming an otherwise boring/annoying activity.

My textbooks’ teacher’s editions often have loads of ancillary materials (even if the textbook is online) that I never use for what it’s intended. I do cannibalize those activities for vocabulary.

One example of this is when there was a transparency (yes, I’ve been teaching a very long time) that was supposed to be used for character analysis. I didn’t think it was that great for that, but it did seem like it would be perfect if I used it for word analysis. I adjusted it slightly, and I had an activity I used for years.

My big vision for Vocabulary Luau is to be a one-stop shop for teachers looking for vocabulary activities, games, and mastery of the necessary theory. I know it’s going to take years to get all of the ideas on the site, however, and in the meantime, it’s essential that we have lots of places we can go to “phone a friend” and get ideas we can use.

In addition to the specific ideas and sites I shared, I hope you are taking away the idea that your life is a rich source of great ideas!

Continue Reading
link to How to Teach Denotation and Connotation

Usually when we use the term "vocabulary," we mean understanding a word's definition so that you can use it and bring it into your own personal lexicon. You can’t study vocabulary without...