The Making Choices vocabulary strategy takes little or no prep, and is an easy way to engage the entire class in vocabulary practice.

🌺 How the Making Choices Activity Works

In the Making Choices vocabulary practice activity, students show how well they understand a target vocabulary word by making choices about whether the word applies or not in a situation posed by the teacher.

When I’m using this strategy, I am flexible about the form of the word (like past or present tense). I also try to use multiple meanings of the word, if they are common (see desolation and peculiar below for examples of this).

I learned about this strategy in the book, Bringing Words to Life: Robust Vocabulary Instruction by Isabel Beck, Margaret McKeown, and Linda Kucan.

Let’s look at exactly how this works in a classroom.

🌺 An Example of the Making Choices Strategy

If a class were reading Charlotte’s Web, and the teacher wanted them to practice using the word dejected, the teacher would say, “If any of things I say could be examples of being dejected, say ‘dejected.’ If not, put your thumb down.”

The teacher would then give several scenarios, some of which apply to the target word and some of which do not. The students respond accordingly.

For the word dejected, the teacher might say: “Would you feel dejected if you…”

It takes some time to get used to coming up with scenarios and ideas for what students should or shouldn’t do/say, so I created a dozen examples for you using common texts from different grade levels.

No matter what grade you teach, it’s worth skimming all of the examples to get ideas you can use with your students. Ready? Let’s look at examples!

Teacher says: “If any of the things I say could be examples of ‘whirled’ or ‘whirling’, spin around. If they aren’t examples, then stay still.

Text: The Year at Maple Hill Farm by Alice and Martin Provensen

Text: The Lighthouse Family: The Storm by Cynthia Rylant

Teacher says: “If any of the things I say seem like something that is ‘peculiar’, say ‘peculiar’. If it’s not peculiar, shake your head no.”

Text: Quest for the Tree Kangaroo by Sy Montgomery

Teacher says: “If I’m describing something that could be considered an expedition, stomp your feet. If it’s not really a good example of an expedition, do nothing.”

Text: A Wrinkle in Time by Madeleine L’Engle

Teacher says: If the behavior I describe might be described as frenzied, say “frenzied”. If it’s not frenzied, say, “not”.

Teacher says: “If the behavior I’m describing could be considered an example of tyranny, put your right fist on your left palm. If not, hold both palms open.”

Teacher says: “If this would make you feel irked, roll your eyes. If not, say ‘not at all’.”

Teacher says: “I’m going to give examples of the word perceive that are all valid(ish!). I want you to show me by uplifted thumb, sideways thumb, or thumb down how strong of an example it is.”

Teacher says: “If these are things that would ameliorate a situation, say ‘yes’. If not, say, ‘no’.”

Hopefully, these examples have given you a strong understanding of the Making Choices vocabulary practice activity, and you’ve seen how handy it can be to have in your strategy toolbox.

Works for any grade level? Check!

Easy to explain to students? Check!

Quick to do? Check!

This one checks all of the boxes.

I hope you love using it in your classroom!

If you would like to be a Vocabulary Luau insider, sign up here & grab your free two-page list of vocabulary question stems. I’d love to have you join the party!🌺🍍🌺🍍 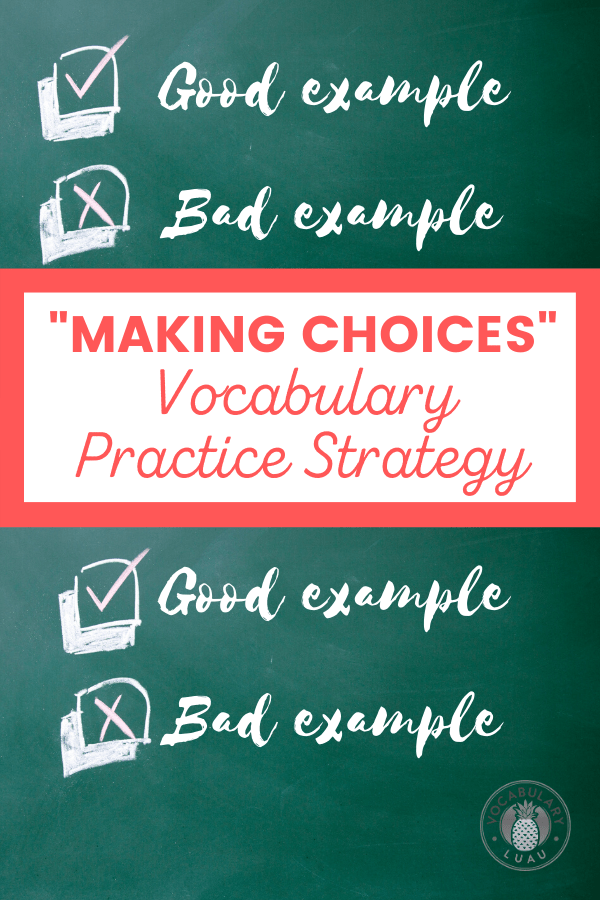