When you get a great critical thinking exercise and pair it with a great vocabulary activity…well, let’s change their Facebook status to “in a relationship with…”

Semantic Maps are just such a pair. Let me persuade you!

Semantic Maps are a tool we use to help students to identify, understand, and recall the meaning of words they read in the text.

They’re research-based, they lend themselves to use with graphic organizers, they support struggling readers, and they are easy to use.

I’ve found that lots of teachers think they’re a great idea, but aren’t sure of exactly how to implement them in a real classroom.

? What is a Semantic Map?

Do Semantic Maps sound like something that could be useful to your students? I’d love to tell you more about exactly how they work in class.

? How are Semantic Maps different from graphic organizers?

First, let’s look at what they’re not.

They ask students to think, “What do I know related to this? What does this make me think of?”

Their strength is that they build on students’ current schema or understanding, allowing those neural pathways to fire up.

Here’s an example of a graphic organizer I created using Smart Art in PowerPoint. This has one “right” answer, doesn’t it? If a student put anything else under “legislative”, we’d be worried, wouldn’t we?

Here’s a Semantic Map over the same topic. In this case, I just gave the student the word “Government” in the center, along with the three branches of government. The student then created the Semantic Map, generating lots of words related to those three areas. This was also created using Smart Art and shapes in PowerPoint:

Do you see the difference? We’re still looking at branches of government, but we’re going to get different results from different students.

I’ll be coming back to graphic organizers later.

? How do I teach students to use a Semantic Map?

When introducing Semantic Maps to students, I find it’s best to guide them in two processes: generating words and then grouping or categorizing those words.

For example, let’s say we’ve just had a lesson on the structure of the cell. For a review, I could write the term “cell structure” on the board (or screen) and ask students to think of all the words they can think of related to cell structure.

Tell them to think of words that:

Once we had a list of words and terms, I would ask them to sort those words into groups. I can either give them categories, or I can have them come up with categories on their own.

If students are coming up with their own categories, tell students that to this, they need to think about ways in which the words are alike and ways which they are different.

Once they’ve grouped their words, they come up with a word or term that describes the group.

If I’m giving students the categories, I will simply tell them what they are and have students sort their words into the category in which they think they fit. That’s what I did in the government example above.

For my cell structure example, I’d give students the categories Nucleus, Cytoplasm, and Cell Membrane.

You can use Semantic Maps as a simple daily activity that takes only a few minutes, or you can have students work with them to create a visually pleasing representation.

There’s no one right way to use Semantic Maps (you’ve already seen a couple of ideas here), but I did want to share a sample idea that is a great way to get started if you’re unfamiliar with the strategy.

Here’s an example of a simple one generated after a discussion of verbs.

? How can I use Semantic Maps with technology?

You’ve seen above how you can use PowerPoint to create Semantic Maps. There are other tech tools that work, as well.

This table lists some possible tech tools, with the pros and cons of each.

? What are the benefits of using a Semantic Map?

Semantic Maps are particularly useful for students who are struggling or who are English Learners, but they work really well with everyone.

First, we have the creativity side. One of the Torrance Traits of Creativity is Fluency – coming up with lots of ideas.

That’s the first part of what we do with a Semantic Map.

Next, we have the added strength of categorizing. Sorting and categorizing are powerful tools. We see it in little children sorting blocks, but the power of dividing things into categories or groups isn’t something that ends in Kindergarten.

We can have students come up with their own categories, or we can give them the categories we want them to use (as I demonstrated above).

If we really want to up the ante, we can have them create new categories and recategorize all of the words. That’s super fun!

Another benefit of Semantic Maps is that they are a no-prep activity. Nothing to print out. Nothing to copy. Just minds and something on which to write. It just doesn’t get easier than this.

? How do Semantic Maps work with graphic organizers?

While you don’t need to use a formal graphic organizer to create a Semantic Map, they go very well together.

Almost any graphic organizer can be used as a Semantic Map.

If you use Thinking Maps®, then a Bubble Map® or a Double Bubble Map® would be my first choice.

The key is to pick a graphic organizer that works for the students, so it’s less about what it looks like and how effective it is in helping them create a visual represenation of their thinking.

You’ve got a few options:

The most important thing is to not let the organizer become more important than the thinking!

? How do Semantic Maps align with standards & research?

Semantic Maps have been studied in research, and those studies have shown some strong benefits.

Semantic Maps are a part of the group of “[i]nstructional activities that allow for a visual display of words and promote students’ comparing and contrasting of new words to known words [that] can be a beneficial means for increasing their vocabulary knowledge” (Rupley, Logan, & Nichols, 1998).

As we practiced above, Semantic Maps not only identify important ideas, but they also show the relationships among those words and ideas (Kholi, & Sharifafar, 2013).

As far as standards, clearly they address some of the CCSS ELA standards, such as:
CCSS.ELA-Literacy.CCRA.L.3

Apply knowledge of language to understand how language functions in different contexts, to make effective choices for meaning or style, and to comprehend more fully when reading or listening.

Determine or clarify the meaning of unknown and multiple-meaning words and phrases by using context clues, analyzing meaningful word parts, and consulting general and specialized reference materials, as appropriate.

But you also see them apply in math standards such as:

If you’re using Next Gen Science Standards, Semantic Maps are a strategy for Crosscutting Concepts, as students begin to recognize the patterns.

? How do I use Semantic Maps in Writing?

Semantic Maps can be used to organize thoughts before writing, creating a structure students can follow. They are a perfect pre-writing strategy.

When students group their ideas, they can easily see where there is unbalance.

They can then add in more details where they are lacking or eliminate some where they have too many.

Semantic Maps are a vocabulary strategy that belong in every teacher’s toolbox. I hope that after reading this you feel confident in giving them a try.

There’s no “wrong” way to do them and the rewards are terrific, so go ahead and see how they work with your students.

Like anything else, it may take a few tries until you (and your students) feel comfortable.

Pretty soon, the strategy will be second nature to you! ?

Join in the luau! You’ll be in the know on all things vocabulary and get any new freebies that come out, even if you miss the article.

and get a free two-page list of vocabulary question stems! 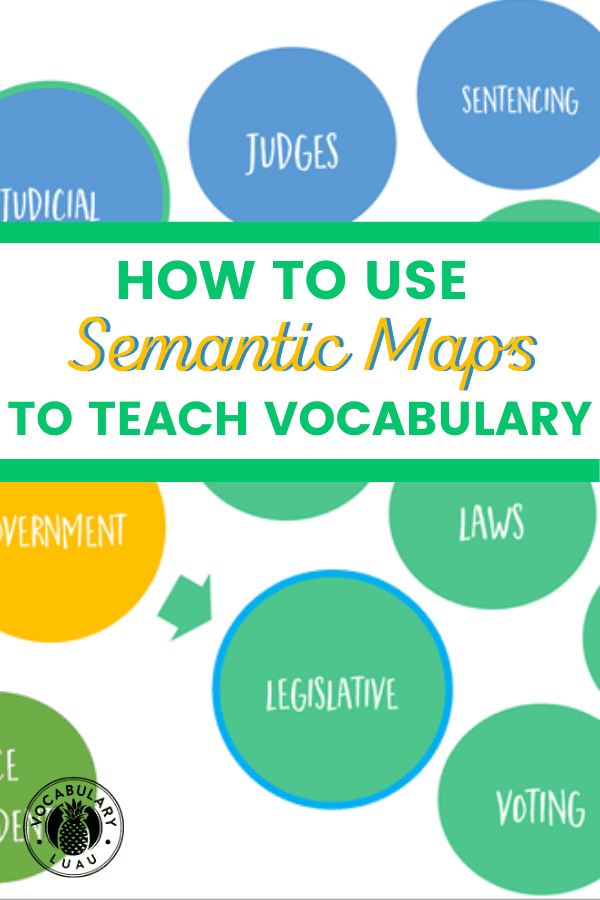