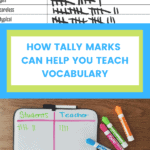 We’re used to using tally marks for math, but tally marks can help you teach vocabulary, too.

Like anything else that sounds simple, there’s more to it if you dive in!

? How to Use Tally Marks to Practice New Vocabulary

I use two primary activities when I have students practice vocabulary with tally marks.

Idea #1: Have students mark whenever the teacher says the word in context, and mark twice when a student does. See how many marks everyone can get combined.

Idea #2: Mark one tally mark no matter who says it, but play it as a teacher versus the class game.

You can do this on a board, a screen, or paper.

I usually use a dry erase board I picked up at the dollar store.

If you’ve read some of my other ideas, you probably already know I’m a huge fan of the dollar store!

It’s very simple to explain this activity to students.

For the first variation where everyone is playing as a class, simply say something like:

“We’ve been learning the new word tentative. We’re going to play a little game with it.

Every time I say the word tentative, I get a tally mark in this column (indicate “teacher” column).

Every time you say the word tentative, you get two tally marks in this column (indicate “student” column).

We’re going to see how many we can get all together!

Now, the word has to be used appropriately. It doesn’t count to use it in a way that doesn’t make sense or to just say it out loud.

It has to be a part of a sentence that makes sense.

Let’s see how well we do today!”

Optionally, you can have them set a goal for how many tallies they think they can get in a class period.

For the second variation (teacher v. students), explain it like this:

“We’ve been learning the new word drastic. We’re going to play a little game with it.

Every time I say the word drastic, I get a tally mark in this column (indicate “teacher” column).

Every time you say the word drastic, you get a tally mark in this column (indicate “student” column).

We’re going to see who can use it more – me or you!

Now, the word has to be used appropriately. It doesn’t count to use it in a way that doesn’t make sense or to just say it out loud.

It has to be a part of a sentence that makes sense.

We don’t need to go to any drastic measures, but let’s see what we can do!”

Should You Award Prizes for Vocabulary Tally Marks?

You can decide if there is some kind of bounty or prize to the winner.

It’s optional, but it does make it even more fun.

The sky’s the limit. You know what your kids value.

? Why Are Tally Marks a Good Strategy for Vocabulary Practice?

There’s a part of our brains called the Reticular Activating System that impacts what we pay attention to.

One thing that triggers it to pay attention is when something is new or attached to a reward.

When we’re working with a new target word, having students use tallies alerts the RAS that this word is worth paying attention to.

Additionally, an important element of acquiring vocabulary is integrating it into use in speech and writing.

This activity encourages students to recognize when target words are being used and will (hopefully!) encourage them to use the word themselves.

While those are the two most common ways I use this strategy, there are some variations that keep it fresh.

In addition to the tally marks, I like to use tally charts as well.

To do this, save the data from a number of times you’ve used this strategy.

I just take a picture of the tally boards, but you can do it more formally if you like.

Once I have five or so words we’ve done, I have the students create tally charts to compare the words.

Sometimes I have them set the chart up themselves, and sometimes I give them a chart with the words already on it.

They then look at the data from previous classes and fill in the chart.

Once they’ve filled in the chart, we have a discussion about it.

By using tally marks in class, we send the message that math tools and strategies apply in a wide range of ways.

This activity is super low prep (all you really need is a target word), which makes it ultra useful. It’s also flexible as far as grade levels. It can be played equally effectively with seven-year-olds and seventeen-year-olds. I love that!

Most importantly, anecdotally I’ve found that it really does lead students to use the words more often, which is the real goal. 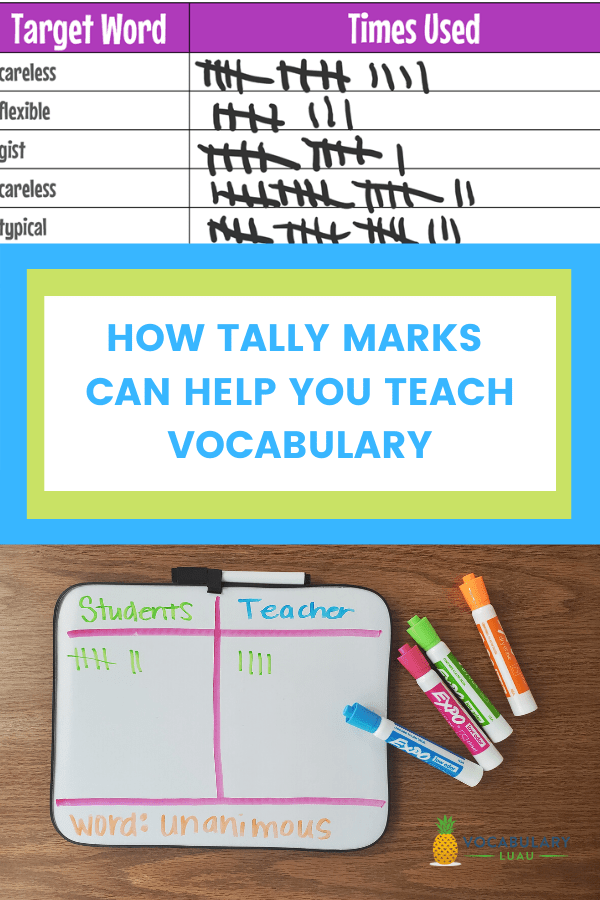 When I’m looking for vocabulary activities, one of my favorite strategies is what I call phone-a-friend. What I mean by that is that I see what other teachers have already thought of and are...